Researchers have used muon detectors to discover a mysterious, 30-metre-long space — which could help to reveal how the 4,500-year-old monument was built.

Physicists have used the by-products of cosmic rays to reveal a large, previously unidentified chamber inside the 4,500-year-old Great Pyramid in Giza, Egypt. The find is the first discovery since the nineteenth century of a major new space inside the pyramid.

Egyptologists have been quick to dismiss any idea of finding lost treasure in the 30-metre-long void. “There’s zero chance of hidden burial chambers,” says Aidan Dodson, an Egyptologist at the University of Bristol, UK, who studies ancient Egyptian tombs. But experts hope that the finding will lead to significant insights into how this spectacular pyramid was built.

The Great Pyramid was constructed by the pharaoh Khufu (also known as Cheops), who reigned from 2509–2483 bc. Constructed from limestone and granite blocks, and rising to 139 metres, it is the oldest and largest of the Egyptian pyramids and one of the most impressive structures to survive from the ancient world.

Whereas other pyramids from this period sit above underground burial chambers, Khufu’s Pyramid contains several large rooms inside the body of the structure itself. These include the King’s chamber, which still holds a stone sarcophagus, the smaller Queen’s chamber and a sloping passageway known as the Grand Gallery.

These large chambers were discovered in the ninth century ad and explored extensively by Western archaeologists in the nineteenth century. But enthusiasts have wondered ever since whether there might be more hidden chambers inside the pyramid, or even whether the king’s real burial chamber is yet to be found.

“There are so many theories — nice ones but also crazy ones,” says Mehdi Tayoubi, president of the Heritage Innovation Preservation institute in Paris. So, he co-founded an international collaboration called Scan Pyramids to find out; the project was supervised by the Egyptian Ministry of Antiquities. The group is “agnostic” about particular theories, he says, but is using non-invasive technologies to search for hidden chambers.

To see through the Great Pyramid, the researchers used a technique developed in high-energy particle physics: they tracked particles called muons, which are produced when cosmic rays strike atoms in the upper atmosphere. Around 10,000 muons rain down on each square metre of Earth’s surface every minute. Sensitive muon detectors have been developed for use in particle accelerators, but they have also been used in the past decade or so to determine the inner structures of volcanoes and to study the damaged nuclear reactor at Fukushima, Japan.

In December 2015, physicist Kunihiro Morishima of Nagoya University, Japan, and his colleagues placed a series of detectors inside the Queen’s chamber, where they would detect muons passing through the pyramid from above. The particles are partially absorbed by stone, so any large holes in the pyramid would result in more muons than expected hitting the detectors.

After several months, “we had an unexpected line”, says Tayoubi. To check the result, two other teams of physicists, from the Japanese High Energy Accelerator Research Organization in Tsukuba and the French Alternative Energies and Atomic Energy Commision in Paris, then used different types of muon detector placed in other locations both inside and outside the pyramid.

All three teams observed a large, unexpected void in the same location above the Grand Gallery (see ‘The Great Pyramid’s big secret‘). Their results were reported in Nature on 2 November. The space is at least 30 metres long, with a similar cross section to the Grand Gallery.  “It was a big surprise,” says Tayoubi. “We’re really excited.”

The chamber could be either horizontal or inclined, the researchers say, and might be made up of two or more smaller spaces. The purpose of the space is unknown, but Tayoubi suggests that it could be “a second Grand Gallery”. 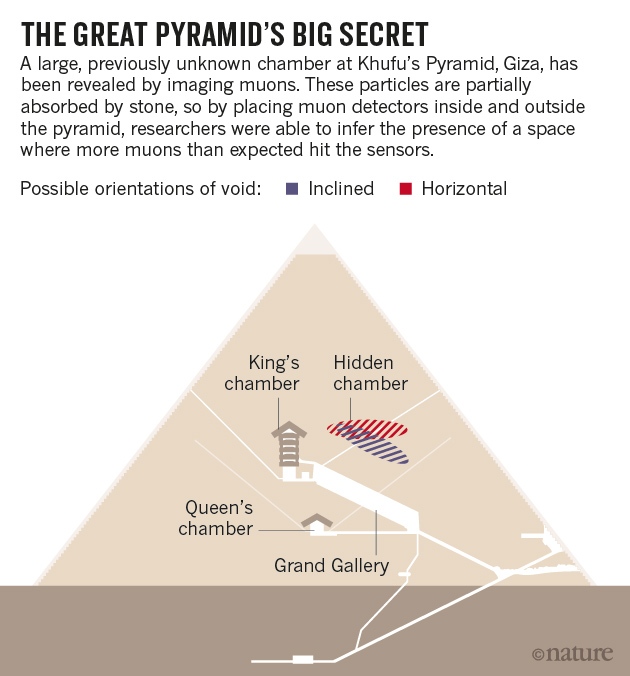 With high, corbelled — or stepped — ceilings and mysterious stone benches, the Grand Gallery is “one of the most fantastic rooms constructed in the ancient world”, says Bob Brier, an Egyptologist at Long Island University in Brookville, New York, who co-wrote the 2008 book The Secret of the Great Pyramid (Smithsonian). “If there’s another one, that’s real news.”

The newly discovered space is unlikely to contain any artefacts relating to the king’s burial, says Dodson, because there’s already a burial chamber with a sarcophagus in it. Instead he speculates that the space might be a “relieving chamber”, intended to reduce the weight of masonry pressing down on the Grand Gallery. Similar relieving chambers are seen above the King’s chamber and in the pyramid of Khufu’s father, Sneferu, at Meidum, another pyramid site in Egypt.

But Colin Reader, an independent geologist and engineer based in Liverpool, UK, who has studied Egyptian pyramids, suggests that the new chamber is too far from the Grand Gallery to serve this purpose. He wonders whether, just as the Grand Gallery leads to the King’s chamber, the void might lead to another, higher chamber. “You would want to investigate and rule that out,” he says.

Brier has a third theory. In 2007, he and French architect Jean-Pierre Houdin suggested that the Grand Gallery formed part of a huge counterweight system. Weights sliding down the floor of the Grand Gallery could have raised the hefty, granite blocks that comprise the King’s chamber, he says. He speculates that the new space could be part of a second counterweight system higher up.

The results also seem to reject the theory, put forward by Houdin and Brier, that the builders of the Great Pyramid used an internal ramp to raise blocks up to the highest levels. “These data suggest that the ramp is not there,” says Brier. “I think we’ve lost.”

Tayoubi says that he next wants to scan Khafre’s (also known as Chephren’s) Pyramid, Egypt’s second largest pyramid. A team led by Nobel-prizewinning physicist Luis Alvarez carried out muon imaging in this pyramid in the late 1960s, using spark chambers as detectors and recording the cosmic-ray data on magnetic tape.

They reported no new chambers in the areas scanned. But technology has improved dramatically since then, points out Tayoubi.

“I think Alvarez was a real visionary guy,” says Tayoubi. “He had the right idea, maybe too early. Our dream would be to give a tribute to Alvarez and redo the Khafre experiment, to see if he was right.”

A previously unknown chamber has been found in the largest of the pyramids in Giza, Egypt.