Based on X-ray videos, EPFL scientists have invented a new robot that mimics the way salamanders walk and swim with unprecedented detail: a tool for understanding the evolution of vertebrate locomotion.

EPFL scientists have invented a new robot that mimics the gait of a salamander with unprecedented detail. The robot features 3D-printed bones, motorized joints and electronic circuitry as its “nervous system”. Inspired by the salamander species Pleurodeles waltl, «Pleurobot» can walk, crawl, and even swim underwater. The results are featured today in the Royal Society journal Interface.

Auke Ijspeert and his team at EPFL’s Biorobotics Laboratory have built salamander robots before, but this is the first time that they have built a robot that is accurately based on the 3D motion of the animal’s skeleton. The scientists used x-ray videos of a salamander from the top and the side, tracking up to 64 points along its skeleton while it performed different types of motion in water and on the ground.

«What is new is really our approach to building Pleurobot,» says Ijspeert. «It involves striking a balance between designing a simplified bone structure and replicating the salamander’s gait in three dimensions.» 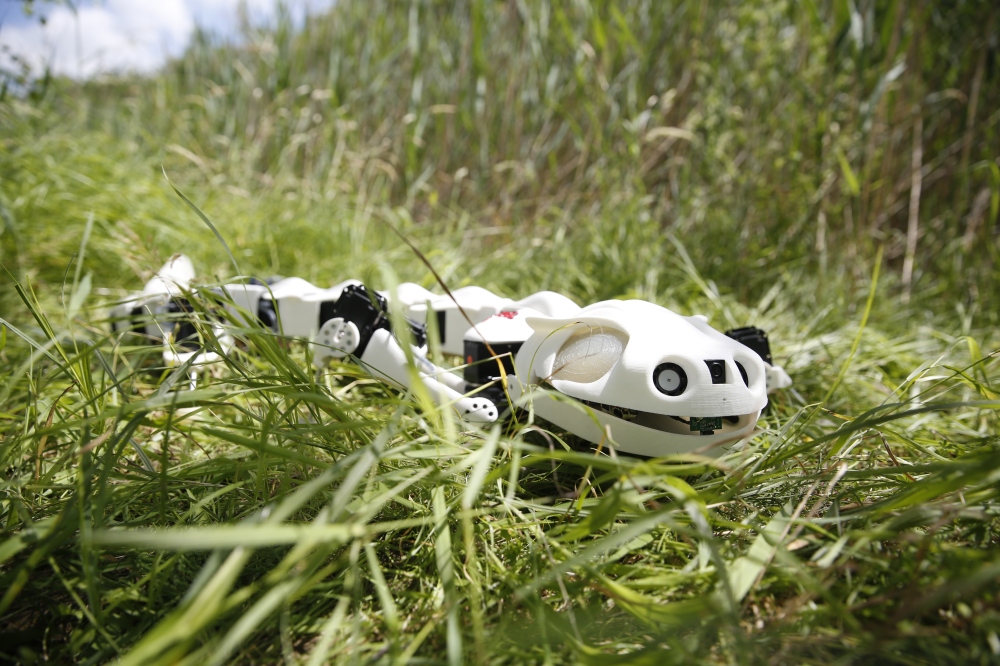 The researchers designed Pleurobot with fewer bones and joints than the real-life creature. The robot features only 27 motors and 11 segments along its spine, while the amphibian has 40 vertebrae and multiple joints, some of which can even rotate freely and move side-to-side or up and down. In the design process, the researchers identified the minimum number of motorized segments required, as well as the optimal placement along the robot’s body. As a result, it could replicate many of the salamander’s types of movement.

«Animal locomotion is an inherently complex process,» says Kostas Karakasilliotis who designed the first versions of the Pleurobot. «Modern tools like cineradiography, 3D printing, and fast computing help us draw closer and closer to understanding and replicating it.»

For Ijspeert, vertebrate locomotion is a sophisticated interplay between the spinal cord, the body and the environment. It is the spinal cord that controls motion, not the brain; so mimicking the salamander’s movement gives insight into how the spinal cord works and how it interacts with the body. A robot that so closely mimics the biomechanical properties of the body can become a useful scientific tool to investigate these interactions.

Learning about the salamander’s spinal cord provides insight into its function in all vertebrates, including humans. The morphology of the amphibian closely resembles that of the first terrestrial creatures, which means that from an evolutionary point of view, the salamander is our ancestor.

Pleurobot is programmed to accurately mimic all of these functions.

Ijspeert believes that understanding the fundamentals of this interplay between the spinal cord and the body’s locomotion will help with the development of future therapies and neuroprosthetic devices for paraplegic patients and amputees. He also thinks that the design methodology used for the Pleurobot can help develop other types of “biorobots”, which will become important tools in neuroscience and biomechanics.

This research received funding from the National Center of Competence in Research (NCCR) in Robotics and from the Swiss National Science Foundation.